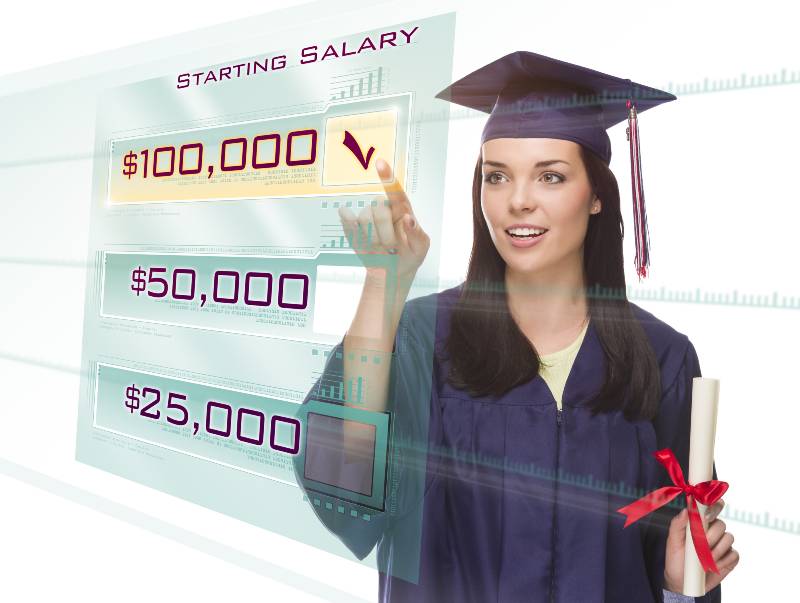 A survey conducted by Real Estate Witch reported that new graduates are overestimating their starting salaries by 88%. The survey, conducted across all majors and institutions, shows that students are setting unrealistic expectations.

Unfortunately for them, the reality is much lower. Today’s average starting salary is $55,260 Which is around half of what graduating students think they’ll be getting.

However, job prospects are much brighter for the class of 2022 compared to recent batches. The National Association of Colleges and Employers came out with a report on available jobs for new graduates for 2022.

It showed that employers plan to hire 31% more new graduates this year versus last year’s class.

Getting Jobs Aren’t The Problem, Salary Expectations Are

The survey, conducted by Real Estate Witch, covered 1,000 students interviewed between March 23-26. At the time, only 15% of new graduates accepted a job offer.

NACE’s salary projections in February ended up with mixed results. Many fields offered increases for new workers. Math and science majors averaged increases of 5.4% for the majority of their jobs.

Among the batch of new graduates, experts predict that computer science majors are once again on top of the salary chain. In 2022, the average salary of incoming workers is $75,900.

Meanwhile, humanities majors should expect an average offer of $50,681. Shawn VanDerziel, NACE executive director, noted the disparity. “This is unlike what we saw last year at this time.

Then, employers projected increases in all reported categories of majors at the bachelor’s degree level,” he said. “Now we’re seeing some majors lose ground in terms of starting salaries,” VanDerziel added.

He said that new graduates know that many employers are having trouble filling positions. This may be a significant factor in the unrealistic expectations of salary.

“I think they’re feeling optimistic at this point. They recognize there is some demand in a lot of fields, and they’re excited about the possibilities,” says Ciletti.

However, the reality is that a six-figure starting salary without a graduate degree is virtually impossible.

However, Point Park professor Sandy Mervosh said that many Gen-Z graduates are looking for more than just a salary. “Students are actually approaching their future employment differently overall.

I know when I speak to my seniors, they are very interested in benefits,” she said. Compared to five years ago, students back then weren’t as interested. Now, kids “realize that there’s value in benefits.”

Among the benefits, new graduates would love to have included good medical coverage plus a decent vacation and sick leave policy.

Having reasonable expectations for promotion and allowed time off to pursue non-work causes are also ideal. Economists say that these benefits are much more realistic compared to getting a six-figure starting salary.

Watch the CBS Pittsburgh news video reporting that college graduates have high expectations of how much they’ll earn: