With Twitter losing $521 Million dollars last year, you can see why…

Here’s an entire breakdown of the proposed deal.

Google integration could make this deal a winner.

Earlier this week, I read an interesting article that suggested Google

(NASDAQ:GOOG) could be preparing to buy Twitter (NYSE:TWTR). While I have had mixed feelings on a potential deal in the past, suddenly it doesn’t seem so crazy. Google could certainly use Twitter to jump into social, while Twitter can save some face by getting shareholders out at a much higher than current price. 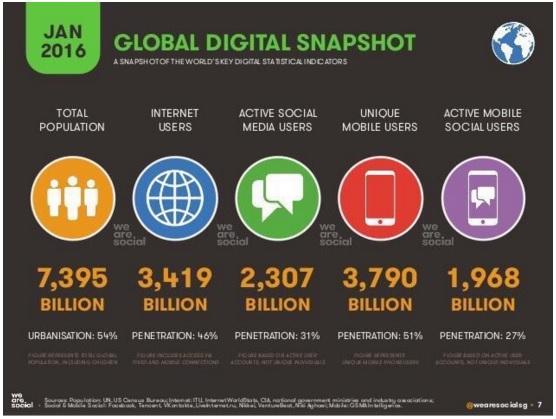 Source: “we are social” in article linked above

The above-linked article discusses multiple strategic initiatives over the past year between Google and Twitter, focusing on user and advertiser improvements. This will allow Twitter to be more successful on the advertising front, while Google gets its foot in a market projected to have almost 2.5 billion users by 2018. Google needs to look more to the future. Social is the one area where Google can improve (see Google Plus), so why not buy one of the established businesses in the space? It’s probably a better idea than trying to build your own platform from scratch, or trying to make a smaller name work and then fail, like Yahoo (NASDAQ:YHOO) did with Tumblr.

Perhaps the most interesting aspect of a deal would be in regards to Periscope. Twitter CEO Jack Dorsey discussed on the Q4 conference call trying to scale the service, while Google has an established video platform already in YouTube. While Twitter monthly active users have hit a speed bump, Periscope users continue to soar. Given the growth in the live video platform, you could make a case that Periscope itself could be worth in the billions over the next couple of years.

Financially, this makes sense on a number of fronts. First, Google has been looking to make acquisitions in the past, and the company has plenty of cash to do so. Twitter closed Tuesday with a market cap of just over $11 billion, which comes down to about $9 billion when you exclude cash/debt on hand. A purchase price of $15 billion would only take up about half of the US cash Google reported in its 10-K filing. The company might even decide to use some debt given historically low interest rates.

In terms of growth, the much smaller Twitter is obviously growing much faster currently. Twitter’s revenue growth this year is projected to be more than double that of Google. For those that would worry about Google’s revenue growth slowing towards the high-single digits or low-double digits in the next couple of years, Twitter would help alleviate those fears.

The deal would fit perfectly into Google’s reporting structure as well. Everyone focuses on Google’s non-GAAP earnings per share, which exclude items like stock-based compensation. While Twitter reported a GAAP loss of more than $521 million last year, stock-based compensation was more than $682 million. Twitter’s non-GAAP net income was actually a positive $276 million according to its Q4 investor letter. As I’ve detailed in the past, Google’s GAAP numbers have not shown a lot of progress in recent years, and this deal would continue that trend. However, since everyone is mostly focusing on the non-GAAP numbers, Twitter’s addition to both revenues and non-GAAP EPS would actually help the situation.

On the other hand, a deal makes sense for Twitter. If Google offers roughly $25 a share (the $15 billion ex-cash discussed above), Twitter shareholders could sell at a price not seen since December. Additionally, most Street targets say the stock is only worth about $20 currently, so Twitter gets a good deal. Finally, Jack Dorsey could go back to running Square (NYSE:SQ) on a full-time basis, rather than have his time split between two companies.

With Twitter shares trading in the mid-teens, perhaps it is time to explore the option of a sale. Google has the cash to make this happen and could certainly use a major boost in the social media space. The Twitter segment would do a lot better, thanks to Google’s advertising prowess, and Twitter shareholders could get out at a decent price. Financially, the deal would help Google on the top and bottom line, especially since most of Twitter’s GAAP losses would be excluded in non-GAAP results.

Disclosure: I/we have no positions in any stocks mentioned, and no plans to initiate any positions within the next 72 hours.

I wrote this article myself, and it expresses my own opinions. I am not receiving compensation for it (other than from Seeking Alpha). I have no business relationship with any company whose stock is mentioned in this article.

Additional disclosure: Investors are always reminded that before making any investment, you should do your own proper due diligence on any name directly or indirectly mentioned in this article. Investors should also consider seeking advice from a broker or financial adviser before making any investment decisions. Any material in this article should be considered general information, and not relied on as a formal investment recommendation.

So how do you think investors for both Twitter and Google will react. Obviously Twitter shareholders will be “peachy” to get out at $25, but what to Google shareholders think?

Cancel reply
Related Topics:merger and acquisition
Up Next

How To Invest In Penny Stocks